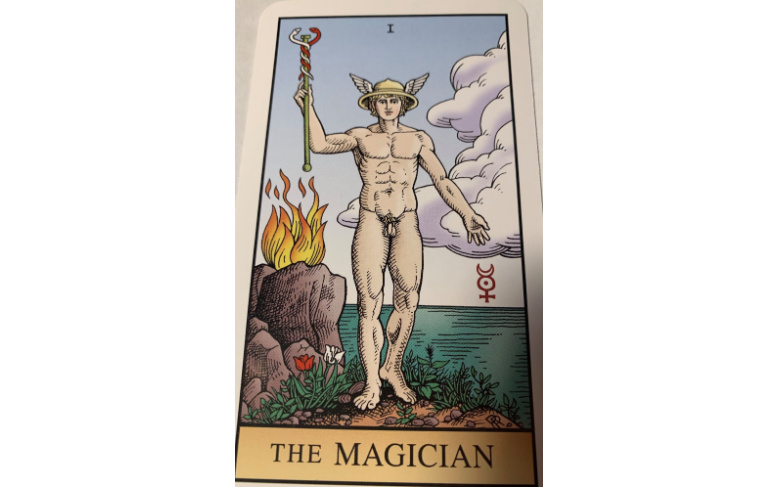 On my office desk sits a framed print of the first card in an alchemically themed tarot deck – the magician. In this case, the magician is pictured as the Greek god Hermes. No, it’s not an idol to which I bow, but an artful depiction of an archetype — a recurring image of a person or role that manifests across social groups and across time. Hermes was a messenger in the Greek pantheon. From his name is derived the word hermeneutics – a set of principles or rules by which something is understood. An example would be the hermeneutics of literary criticism; principles by which often ancient writings are understood today. Hermes’ role was to convey a message.

One of Hermes’ responsibilities was to conduct souls into murky Hades, the realm of the dead, the place where energetic essence remained quite alive even after bodily decay. It was a task he had to grow into. In his youth, Hermes transgressed divine boundaries and stole the cattle of Apollo. Zeus decreed that he return the cattle and cease his trespassing ways. He learned the importance of boundaries in relationships. He also learned to redirect his subterranean masculine energy so that he would not cross swords, so to speak, again with the other gods. In the Greek speaking world, the piles of stones used to demarcate roads were named after Hermes; they were called herms. The stones placed visibly as boundary markers represented the unseen boundaries deep down within Hermes, and the respect required of one person for another. Only because he went deep into the shadowy place in himself could he be a guide for those heading into the shadowy place of Hades, the mythic underworld symbolic of the human psyche in its unconscious aspects. He knew his way around because he had encountered it within.

Hermes was connecting what was below with what was above, reconciling them. In this is healing. The doctor’s symbolic caduceus is derived from the wand of Hermes. He is messenger, but he is also ongoing conversation that connects above and below, within and without, person as individual and integral part of community.

Hermes is an archetype of the psychotherapist as well as of the psychotherapeutic process. His iconic image inspires my work and calls me to continue to do my own work, visiting the underworld of my soul to both keep connections AND good boundaries, within and without, and to sustain the dialog!

Christians may want to explore the hermeneutic of Christ as psycho-spiritual integrative guide as well as integration itself; Christ Jesus as messenger and message, and the disciple as participating in the integrative dialog of grace, extending the disciple as a baptized version of Hermes, a manifestation of Christ.